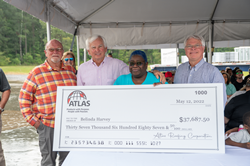 Atlas rewards its first logo designer with nearly $40,000 and a new roof

“When we discovered that Belinda was the designer of our original logo, we were determined to find her.” — Jeff Key, Director of Marketing for Atlas Roofing

Atlas Roofing Corporation was thrilled to donate nearly $40,000 to Belinda Harvey, resident of Meridian, MS, and creator of the roofing manufacturer’s first logo in 1982.

That year, Harvey won the Atlas Roofing logo design contest, for which she received a $200 savings voucher. This historical fact, however, has been all but forgotten for the past four decades, that is, until Executive Office Administrator Robin Seale found an old press release about it and shared the news. with Jeff Key, Director of Marketing.

“When we found out that Belinda was the designer of our original logo, we were determined to find her,” Key explained. “According to the 1982 press release, we learned that she was attending Meridian Community College, but we had no idea where she would be now, 40 years later. But lo and behold, she was still in Meridian, and we were able to find her.

In recognition of Harvey’s historic work, the Atlas marketing team has concocted an idea to give back to him by challenging employees to donate $40 each for the 40th anniversary celebration in 2022.

Part of a company-wide email read: “Because her life has been of service to others, we have the opportunity to give back to the woman who helped give us our greatest symbol. visible.” With help from the company itself, Atlas management pledged to match employee contributions at 150% of what was collected.

In addition to the financial donation, the manufacturer is also donating materials from its Meridian plant, partnering with a local contractor to give Harvey a new home.

“In recognition of the important role she has played in the history of our company, we wanted to offer Mrs. Harvey a roof made with the highest quality products that we know will protect her and her home, for years to come,” said Lauren Carlson, marketing and communications manager for Atlas.

While Atlas updated its logo late last year, the original – Harvey’s design – had been the company’s visual representation for nearly 40 years, during which time Atlas went from its first asphalt shingle manufacturing plant in Meridian, MS, to 36 state-of-the-art facilities in North America.

Atlas is an innovative, customer-focused supplier of asphalt shingles, roof underlayments, rigid expanded polystyrene and polyiso insulation, geofoam, cold chain, protective packaging, foam liner and advanced coated and paper facings and underlays for a diverse set of markets. . Atlas has grown from a single asphalt shingle manufacturing plant to 36 plants in North America with product distribution worldwide. Products from the company’s four main divisions, Polyiso Roof and Wall Insulation, Shingles and Underlayments, Molded Products and Web Technologies, are manufactured in state-of-the-art facilities and shipped from its network of manufacturing plants and distribution facilities in the United States. United States, Canada and Mexico.

Share the article on social networks or by e-mail:

How real estate brokers could instantly improve the industry