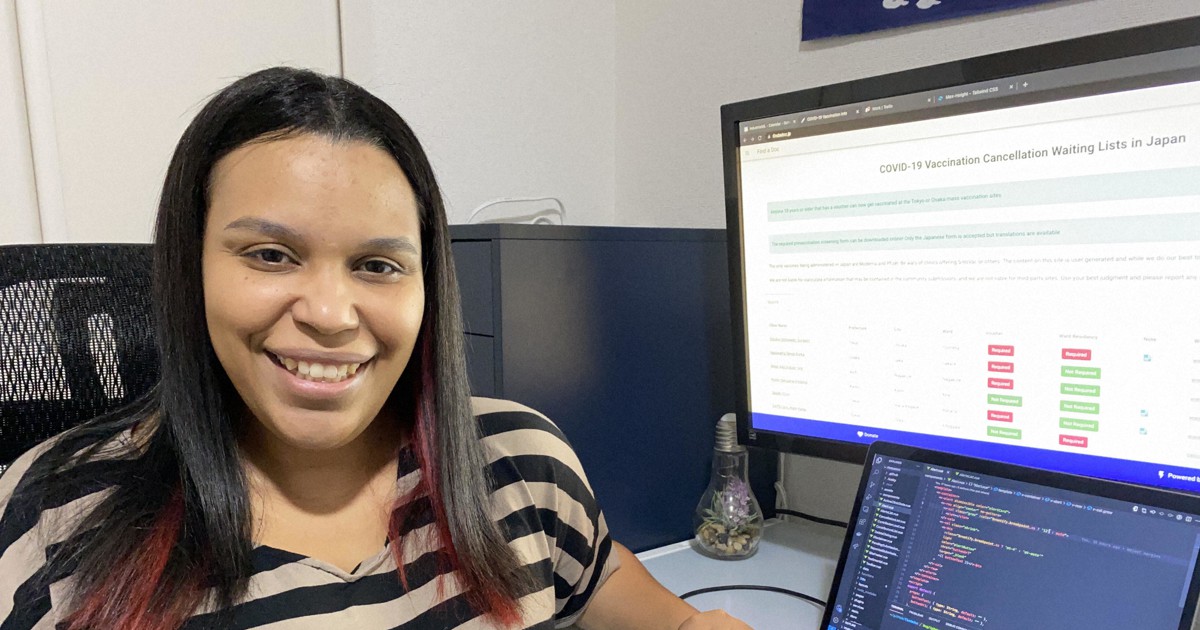 TOKYO – A website providing coronavirus vaccination information in 21 languages ​​has received 70,000 visits since its launch three months ago. With the vaccination system complicated enough to confuse even Japanese people, the multilingual website is designed to help foreign residents who are even more disadvantaged because they do not speak the language.

Among the 21 languages ​​available in Find a Doc are English, French, Mongolian and Indonesian. Its database displays medical facilities that accept individual vaccinations for people who wish to be vaccinated, or whose appointments have been canceled.

Users can enter the name of their municipality to check the name and location of local medical facilities, their websites, whether they need vaccination coupons issued by the local government, and whether vaccinations are limited to residents of the city. municipality. Currently, around 150 hospitals and clinics across Japan are listed.

The website is operated by LaShawn Toyoda. When information is received from site users, she approves the ad after verifying it herself. If the medical establishment no longer accepts appointments, it removes them from the list.

Originally from Maryland in the United States, Toyoda moved from Shanghai in 2011 to teach English in Japan. She has taught in primary and secondary schools and universities.

But in March 2020, she quit her job at a university in Tokyo because she wasn’t comfortable continuing face-to-face classes during the coronavirus pandemic. His first concern was for his then 6 month old daughter. At the time, she feared that if she got infected, she would not be able to take care of her daughter and that she might also be infected.

But finding a new job turned out to be difficult. When Toyoda wrote on Twitter that she had quit her job, a friend who is the CTO at a programming school recommended that she take an online course. The class started in August 2020, and she spent her weekdays from 9 a.m. to 6 p.m. at the computer. It was a difficult time, but with encouragement from her family and classmates, she graduated in January 2021 and has been working as a programmer for an IT company since March.

When Toyoda started his new job, COVID-19 vaccines were gradually becoming available in Japan. The website of the Ministry of Health, Labor and Welfare had a function to translate its text into English, Chinese and Korean, but even Toyoda, who has lived in Japan for over 10 years, is married to a Japanese man. and speaks Japanese, found it difficult to understand terminology relating to administrative bodies and medical care.

She said that even though she speaks English and Japanese, obtaining information from public institutions is intimidating and foreigners whose mother tongue is not a primary language may not have many people to turn to easily. She pointed out that information on where to get on the cancellation waiting list and how to get vaccinated outside of people’s areas of residence was particularly complicated.

Toyoda has spent nights and weekends collecting and translating medical facility data and other information with the goal of creating a platform where foreigners living in Japan can find medical facilities that have listings. waiting for cancellation for vaccine candidates. People she knew also helped. She said she worked on the assumption that young people who didn’t know when they would receive their vaccination vouchers would want to take any slots that would open up as a result of cancellations.

Much of the vaccine information from local governments was initially focused on the elderly, while everything else was posted on the websites of individual medical institutions. To create the waiting list, Toyoda said she needed to explore medical facility websites one by one and understood the need to create a system that directly connects users and medical facilities so that when appointments become available, people who wish to be vaccinated can immediately get the shot.

More than 5,000 people visited the site within 24 hours of its launch, with the number of hits reaching over 70,000 in early September. Most of the users are in their 20s and 30s. Although English, Portuguese and Vietnamese are the most popular foreign languages, Japanese actually accounts for more than half of searches, a fact according to Toyoda proves that everyone – not just foreigners – is worried about the status of vaccinations.

Viana’s mother-in-law lives in Toyota City, Aichi Prefecture, and speaks Japanese, but does not fully understand the language. During the medical interview for the vaccination at her workplace, the doctor told her that she could not be vaccinated. Because she did not understand the precise reason, she waited for the local government to send her a vaccination coupon.

But the vaccination coupon she received was only in Japanese. Although the city has a call center that answers in 12 languages, the Portuguese-speaking interpreter was not available when she called, so she was unable to inquire.

Viana introduced her stepmom Find a Doc after turning to her for help. It turned out that a medical institution in Nagoya accepted registrations on the waiting list. She was able to get vaccinated earlier than on schedule set by the city of Toyota.

“Medical terminology is not something that we use in our daily life, so it is quite difficult to understand in a language that we are not used to. I felt that the difficulty for foreigners to access medical care (in Japan) became even more evident through the coronavirus pandemic, ”said Viana.

Currently, Find a Doc is run by over 60 volunteers. Donations are its only source of income, but Toyoda is determined to keep it free and aims to make it a nonprofit in the future. She praised the Japanese medical system as being excellent by global standards and said she was keen to help people get treatment in hospitals if needed, even if they don’t understand the language.

Find a Doc is available at https://www.findadoc.jp

The perilous and roadless jungle becomes a path of hopeless hope

Adobe Creative Cloud training – save 40% on this sale